After the fall of France to the Nazi Blitzkrieg in 1940 the Germans soon began to build up forces in the Channel ports ready for an invasion of Britain. The British coastal artillery defences were very weak so an emergency programme of work was initiated updating existing batteries and building new batteries along the coastline. One of the first of these new batteries was built in the summer of1940 at St. Margaret’s-at-Cliffe near Dover. The battery was armed with four 5.5-inch naval guns that had been removed from the battlecruiser HMS ‘Hood’ during her re-fit the previous May. The guns were installed in four reinforced, concrete gun-houses sited along the cliff-top. The battery was manned by the 4 Officers and 165 other Ranks of 411 Battery, part of 540 Coast Regiment, Royal Artillery. At the rear of the four gun emplacements men of 172 Tunnelling Company, Royal Engineers dug out a deep shelter to an average depth of 60 foot to provide safe accommodation for the crews in the event of the battery being shelled or bombed. The battery’s guns had only a limited range of less than 18,000 yards making them fairly ineffectual for their purpose of shelling enemy ships out in the Channel and it was soon made redundant when Fan Bay Battery, with its more powerful 6-inch guns, came into operation in April 1941. Thereafter St. Margaret’s became a training battery and later in the War it was converted into a ’flashing’ battery. When enemy shipping was spotted out in the Channel the guns would be loaded with special charges which produced a bright muzzle flash and fired deceiving the enemy into thinking they were coming under fire from heavy guns causing them to change course and then come into range of the real heavy 9.2-inch guns of South Foreland Battery. The Battery fell out of use after the War and in the 1970’s the gun-houses and all other surface structures were demolished leaving just the Deep Shelter as the only trace left behind.

There were two Batteries on this stretch of the White Cliffs, to follow is information on the guns at each

Excavations started on 28 December 1940 and the first gun arrived on 25 March 1941, although their best-known action came a few months later, on 12 February 1942, when the light battleships Gneisenau, Scharnhorst and the heavy cruiser Prinz Eugen attempted the Channel Dash from Brest back to Germany. The K band radar at South Foreland started to track the ships of the Brest Group coming up the Channel towards Cap Gris Nez. At 12:19, the first salvo was fired; since maximum visibility was five miles, there was no observation of fall of shot by either sight or radar. The "blips" of the K-set clearly showed the zig-zagging of the ships and full battery salvo firing began without verifying fall-of-shot. 33 rounds were fired at the German ships, which were moving out of range at 30 kn (35 mph; 56 km/h).

Initially it was thought that four hits had been made, but the Germans revealed that all had missed. By the end of the war the four guns had expended 2,248 shells, most in the months before and after the Normandy landings. 28 enemy ships were confirmed sunk between all the coastal batteries around Dover and the deterrent effect was significant

Gun "Jane" under construction - Pictures Above

Situated on the cliffs between Dover & St. Margaret’s, this was the heaviest gun battery installed along Kent’s coastline during WWII. It consisted of 2 x 15” Naval guns supplied, along with their mountings and power plants, by the Admiralty. The War Office assumed responsibility for all the building work on the site including the laying of railway tracks which connected to the main Dover to Deal line at Martin Mill. The installation of the guns and construction of the ancillary buildings, magazines, underground plotting room and shelters was completed on 19th May 1942 when they were handed over to the Army to be manned by men from 540 Coast Defence Regiment. The huge guns were soon blessed with the nicknames ‘Jane’ (after a popular newspaper cartoon character of the time) and ‘Clem’ (after the then Deputy PM – Clement Atlee). Apart from their basic armoured housings the only passive protection afforded to the guns was the reverse-slope of their emplacements and some heavy camouflage netting. However a HAA battery was installed nearby which offered substantial offensive protection from air attack. The Battery continued in service after the War, as part of the Coast Training Regiment, until the mid 1950’s when it was de-commissioned and the guns dismantled.

Entrance to the Magazines for No.2 & No.3 Guns, from the top of the Magazine hill you can look down onto the area of grass towards St Margarets where Workshops, Transformer, Deep Shelter & Range once stood. 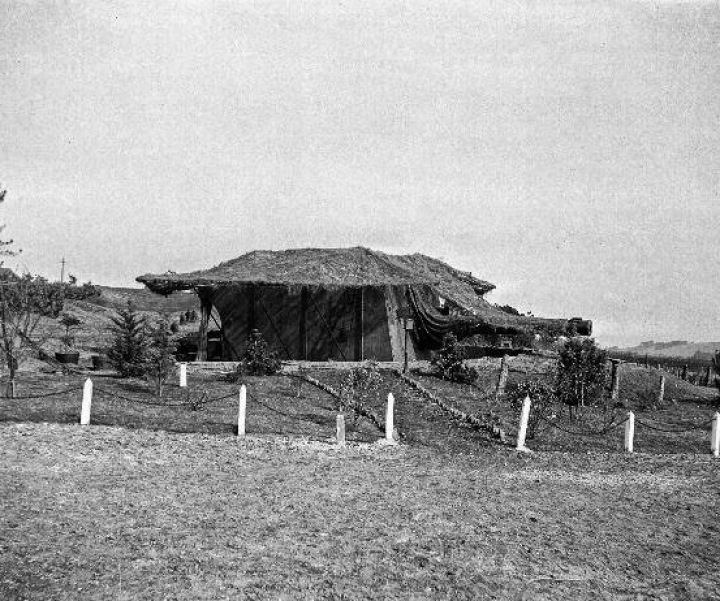 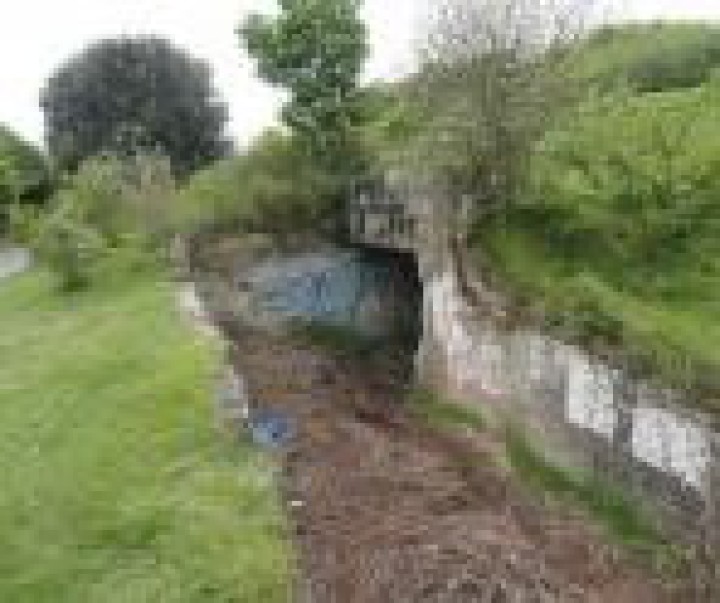 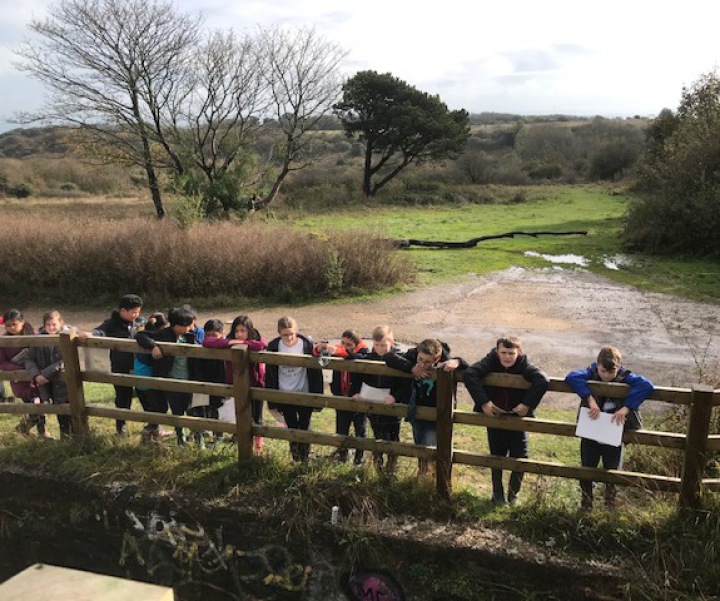 Note that individual gun positions are not exact, and that there are additional smaller batteries not depicted on this map

ACROSS THE SEA IN CALAIS

When German Panzers rolled into the French coastal region around Calais in late May 1940, their crews could stare across the English Channel at the White Cliffs of Dover, just 20 miles away.

The United Kingdom had not faced a hostile enemy across the Channel since the Napoleonic Wars. In that interval, the maximum range of heavy artillery had increased dramatically. Hitler was alert to the opportunity this afforded him for his planned invasion of Britain, dubbed Operation Sea Lion.

“Strong forces of coastal artillery must command and protect the forward coastal area,” Hitler wrote in a July 16 invasion plan. He wanted the batteries not only to protect his invasion force from the Royal Navy, but to bombard the British defenders on the opposite shore.

The big guns began to arrive a week later, accompanied by work crews to build giant concrete casements to protect them from counter-bombardment. The best were turreted naval guns originally designed for use on battleships that could track and fire rapidly to hit moving ships.

On Cape Blanc Nez, the beach immediately west of Calais, three 406-millimeter “Adolf Cannons” were installed in casemates shielded by 13 feet of concrete. These could lob one-ton shells up to a distance of 34 miles.

Four more turreted coastal guns were installed around Calais, and three 305-millimeter naval guns with a 32 mile range were deployed near the city of Boulogne to the south. The Wehrmacht also brought eight railway guns and 40 army siege guns into the Calais region. These ranged from 21 to 28 centimeters in caliber. However, they lacked the ability to rapidly adjust fire to strike moving maritime targets. 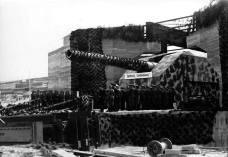 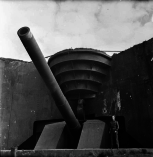 Allied solder poses next to a 38-centimeter gun of the Todt Battery after its surrender. Imperial War Museum photo